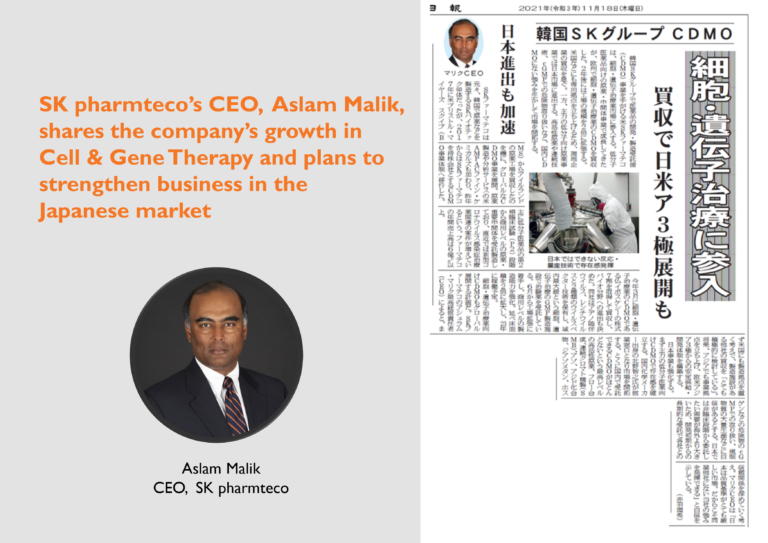 In a recent interview with Japan Chemical Daily, Aslam Malik, CEO of SK pharmteco, shares the company’s growth in Cell & Gene Therapy and plans to strengthen business in the Japanese market. Read the full article below:

SK pharmteco, an US company engaged in CDMO business arm of the South Korean conglomerate SK Group, is making a full-scale entry into the cell and gene therapy drug market. SK pharmteco has been growing in APIs and intermediates for small molecule drugs. And this year, they acquired a CDMO for cell and gene therapies in Europe, which will double the size of its plant in two years. The company intends to set up dedicated sites in the U.S. and other countries for cell and gene therapies and is considering acquiring local companies. On the other hand, in the mainstay small molecule API business, the company will make a full-scale entry into the Japanese market. The company will develop the market by taking advantage of its strengths, such as high potency APIs and continuous technologies (reaction and separation), energetic (hazardous) chemistry under cGMP, which are not much available at CDMOs in Japan.

SK biotek was originally a local company that manufactures APIs in South Korea. After they acquired an API plant in Ireland from Bristol-Myers Squibb (BMS) in 2017, it entered the global CDMO business in earnest. And AMPAC Fine Chemicals, a U.S. API manufacturing and analysis service provider, has joined, the company shifted to a CDMO business structure last year with SK pharmteco as the holding company. They are mainly engaged in the contract manufacturing of APIs and intermediates for small molecule drugs from the Phase II clinical trial stage to the commercial level and have recently been receiving an increasing number of contracts related to anti-viral drugs for the COVID-19. Their annual sales are about over $600 million.

In March this year, SK pharmteco acquired 70% of the shares of French CDMO Yposkesi, specialized in cell and gene therapy. The company has two types of viral vector technology, adeno-associated virus and lentivirus, and has one of the largest GMP manufacturing facilities for cell and gene therapy in the region. The total floor area will be doubled and the new plant is scheduled to start operations in 2023.

According to Aslam Malik, CEO of SK pharmteco, the company intends to establish a manufacturing site in the U.S. first and is “very actively considering” the acquisition of other companies with such facilities. In the future, the company will also expand its footprint in Asia to cover a global stable supply from EU, US and Asia.

The company will also strengthen its business in Japan. First of all, we will establish a presence in the mainstay CDMO for small molecule drugs. Dr. Tomoyuki Kitano will be the sales contact in Japan and develop the market. In particular, they are confident in their ability to provide the highest level of high potency APIs, flow reactions, continuous chromatography (SMB), hazardous chemical under cGMP (Azo, phosgene, azide and diazomethane), and commercial manufacturing of controlled substances, as there are almost no CDMOs available in Japan. In Japan, there is a greater demand for outsourcing from the non-clinical stage than overseas, so the company plans to deepen its relationship of trust with companies through long-term outsourcing from the early development stage. “Japan is a market with very strict quality standards. That’s why we can demonstrate our strength that other companies in the same industry don’t have”, says Aslam.